Want to know the most effective way to say "No"? 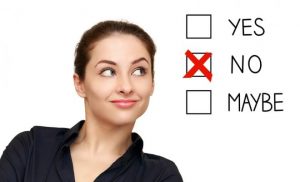 Being helpful is a nice thing and all, but it’s also exhausting — so much so, in fact, that research has shown that offering to help your co-workers too frequently can actually make you worse at your job. Even just being on the receiving end of a colleague’s venting can feel like an energy-sapping emotional burden, especially if you’re the office “toxic handler,” a term coined by psychologists to describe the one person everyone complains to.

Once you’re in it, though, it can be a hard role to climb out of — saying no to people who want your time and attention, after a history of saying yes, can be a challenge. But in a recent post on Mental Floss, Shaunacy Ferro highlighted some advice for getting better at “no,” in work and in life: Choose your words carefully. A refusal that includes “don’t” — as in, “I don’t answer emails on a Saturday night” — is more powerful than one centered around “can’t.”

The observation comes from a 2012 study in the Journal of Consumer Research, which found that the way a statement was framed had an effect on how well people thought they could stick to it. Saying “I don’t eat X” when tempted by an unhealthy snack, for example, made participants feel more “psychologically empowered” than using “can’t.” The same held true with a scenario about resolving to exercise each day: “I don’t skip my workout” was a more powerful motivator to get to the gym than “I can’t skip my workout.”

The reason, Ferro explained, comes down to how much room the statement leaves for you to later reverse course: “Regardless of whether you’re talking to yourself or another person, ‘can’t’ suggests that you might want to do something, but aren’t able to,” she wrote. “The implication is that in another set of circumstances, you could.” With “I don’t,” on the other hand, “there’s no room for debate. It’s a hard-and-fast rule that you set for yourself.” Say it to yourself: I don’t say yes to things I want to say no to. Doesn’t that feel good?

For more and Original Article.

Learn how you can become a Home Health Aide.

May Is Mental Health Awareness Month

How To Put Together Your Own First-Aid Kit

The Right Reason to Quit Smoking